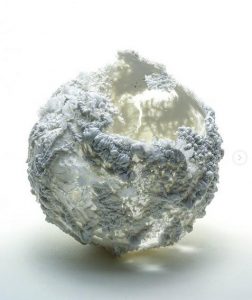 Ken’s introduction to ceramics began as a child in Greece, where he was born, but he only touched clay fleetingly. His formal studies took him in a very different direction (a university degree in Zoology and Botany) and his profession in yet another, embarking upon a career in finance that took him to Japan. It was in a small Tokyo studio nestled amongst the high rises of Shibuya that he attended functional ceramics classes for several years. Returning to the UK almost a decade later, he made himself a promise: if I ever broke my favourite creation (a bowl inspired by 18th century Seto ware) I would build a ceramic studio and re-create it. Four years ago, he kept that promise!

The pleasure of experimentation, in materials and process, is the primary driver of his creativity. He is naturally drawn to unconventional approaches. Calculated risk-taking always involved. Failures are often a more powerful creative force than successes (and certainly much more frequent), yet he revels in unpredictable outcomes. Every step is a new step: what can be discovered next?

Over the past year or so his curiosity has led him to discover the infinite clay textures that can be obtained by taking advantage of an extraordinary property of latex balloons: expansion and contraction on an enormous scale. Used as armatures for applying novel mixtures of porcelain clay and binders of all sorts (paper and glass fibre, gums and glues) – but removed before firing – he has explored the creation of ‘vessels’ of unusual translucency, movement, delicacy and beauty.