Lee Cartledge – Richard Bateson and the Potteries of Burton-in-Lonsdale 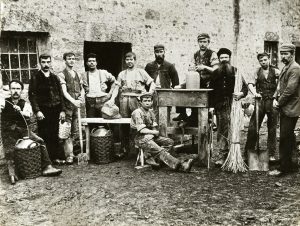 Lee Cartledge, of Bentham Pottery, will be talking about the traditional potteries of Burton-in-Lonsdale in Yorkshire, and the early days of studio pottery. The village had a long tradition of country pottery serving the local community, taking advantage of open cast clay and coal, and the River Greta. Around 1840 many of the potteries switched from earthenware to stoneware, specialising in bottles and jars that were sold further afield, enabled by the improving transport network. The story centres on Richard Bateson, who started work at his father’s pottery in 1907, aged 13, and became one of the two main throwers there – the workforce of about 30 people dug and processed 12 – 18 tons of clay a week. The demand for ceramic bottles declined and the pottery close, so Richard started his own pottery making earthenware products, and this survived until 1944 when it went bankrupt.

However the Royal College of Arts had relocated to nearby Ambleside during World War 2, and used Richard’s pottery to fire kilns and give students experience ad training, so after the war they invited Richard down to London to teach throwing, and he ended up teaching at a number of colleges and art schools, training up many of the early studio potters.

Lee’s mother, Kathy, started Bentham Pottery in Burton in 1976. One day a man in his 80’s came in, and asked if he could throw a pot – this was Richard Bateson. He became a regular visitor, passing on his knowledge to Kathy and Lee, and sowing the seeds for Lee’s book “The Last Potter of Black Burton”