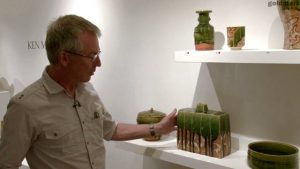 Sebastian Blackie is best known as a vessel maker combining traditional and innovative making techniques and experimental firing methods including high temperature sagger firing, paper kilns and layer glazing.  He started his teaching career at Farnham School of Art (now University of the Creative Arts) in 1974 with the late Henry Hammond where he took the lead in developing kiln building and wood firing, and eventually became head of the 3D degree course. In 1992 he resigned to concentrate on making, though still lecturing part time.  He has both exhibited and taught in numerous locations around the world, including the US, Australia, Japan and China. Blackie has written extensively about ceramic, including the book Dear Mr Leach…. In 2004 he was made professor of ceramics at Derby university where he ran an innovative arts MA before becoming Research Leader for the School of Arts.

Sebastian Blackie will be giving an illustrated talk on some of the ceramics in his collection including some of his own work. They will include Takashi Yasuda, Paul Soldner, Jean Nicholas Gérard, Sandy Lockwood, Hans Coper and Walter Keeler. Blackie will discuss how they are made, how he has used them and include some fascinating anecdotes on their histories.