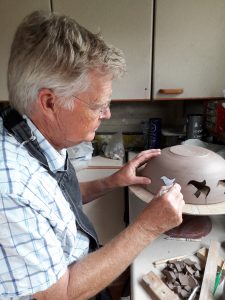 My first memory of clay is watching brick making in India. My father was a doctor, and he needed a new hospital building, so he hired a family of brickmakers, who camped at the back of the hospital next to the local reservoir (bund). They puddled earth and water with their feet, cast bricks from wooden formers which were dried in the sun, then built into kilns. The women carrying piles of bricks on their heads up the steep, stepped sides of the kiln. The kiln stack was covered with straw and clay, fired with coal, wood and straw, over several days. I was intrigued to see the finished hard bricks!

And then there were the village potters, throwing pots on a cartwheel propelled with their feet. They made water jars, cooking pots and the small ‘chai’ cups (thrown off the hump) which after use were just thrown on the ground – the ultimate in recycling!

All this inspired my father to take up pottery on his return to the UK. I, in turn, followed his interest, though did not have much of a chance to learn from him. When he died, I brought all his equipment here, and I am still finding things that I wonder what he did with them!

Moving to Petersfield 40 years ago, I attended various classes and courses over the years – Petersfield School, West Dean, 318 Ceramics and West Street Potters. And, of course, numerous demonstrations including SCG.

One of the fascinating things about clay, is the variety of making and processes. I still struggle to throw a perfect cylinder and have yet to make the statutory 100 identical cylinders! Recently I have enjoyed altering thrown forms and combining components.

On the hand building side, one of the bits of kit Dad had was a small pug mill / extruder which can make hollow extrusions. Combining cylindrical, square, and hexagonal extrusions creates some unusual and fascinating shaped pots.

The magic of firing is incredible. On a visit, several years ago, to Australia, where our son lives, I came across teepee firing. Essentially the same process as pit firing, but above ground. A circle of bricks is built, filled with sawdust and kindling, stacked with pots surrounded by organic material and the usual chemicals (copper carbonate) with more firewood above. Then a teepee of old fence panels is built above and covered with several layers of paper and slip (glossy magazines work best). The whole lot is lit from the bottom, billowing smoke follows, and if well-constructed and dry, flames leaping out the top. It burns for several hours, the teepee collapses, retaining the heat. The following day brings the excitement of raking through the ash and retrieving the posts, admiring all the colours, reds, browns, grey and black. I have introduced this form of firing to our Petersfield Arts & Crafts Society Potters groups and to my class at West Street Potters. It’s a great group activity and effort, especially the paper and slip bit! 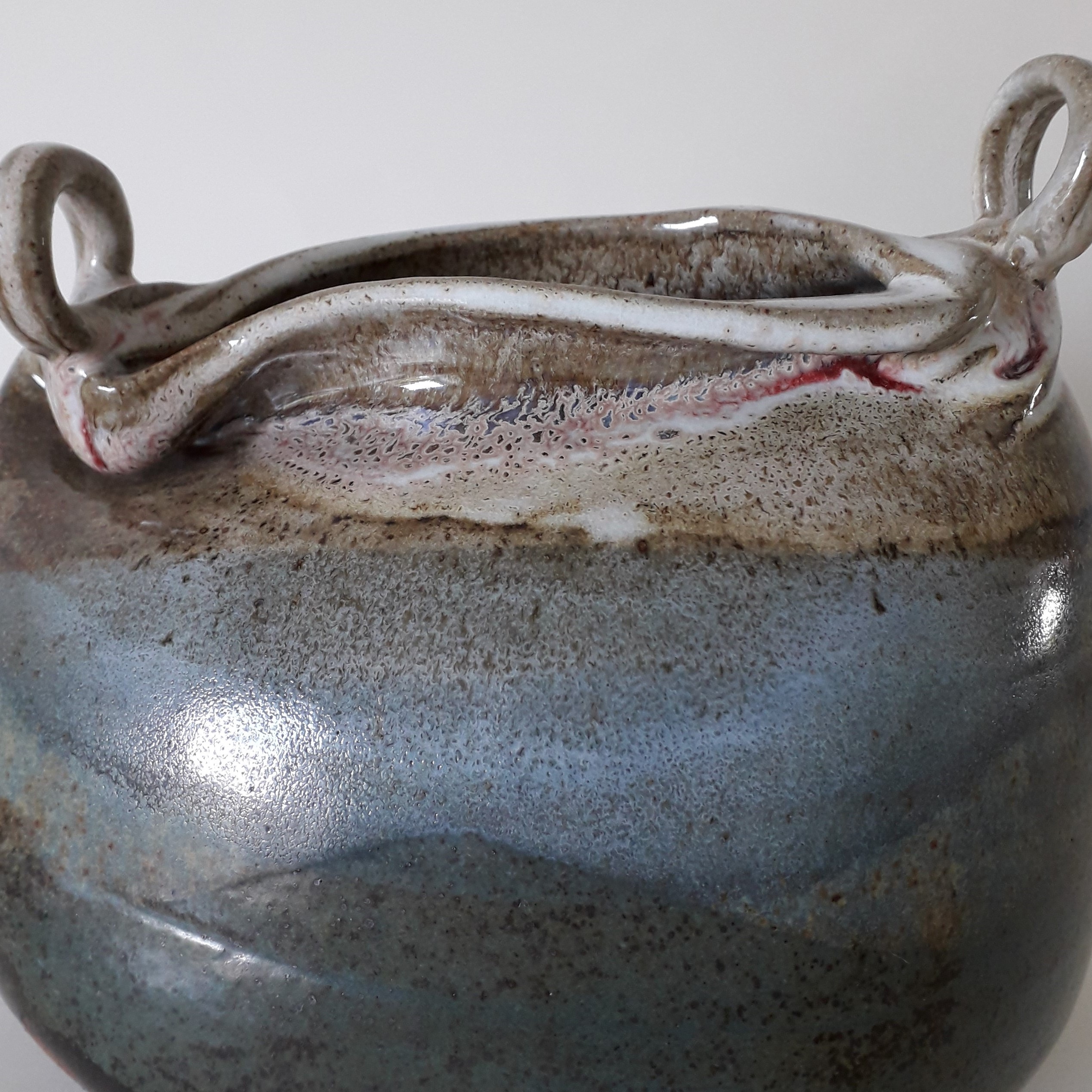 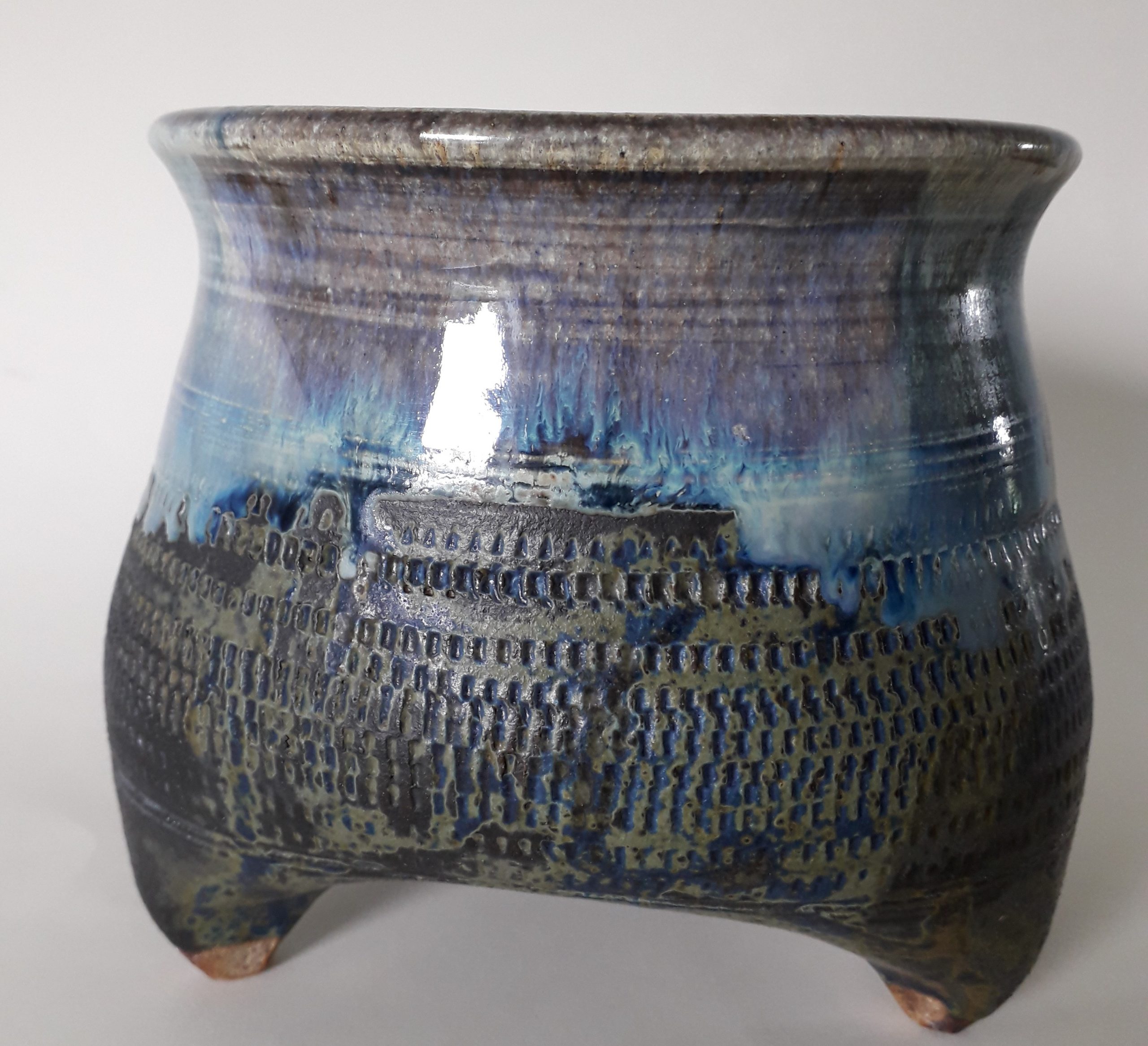 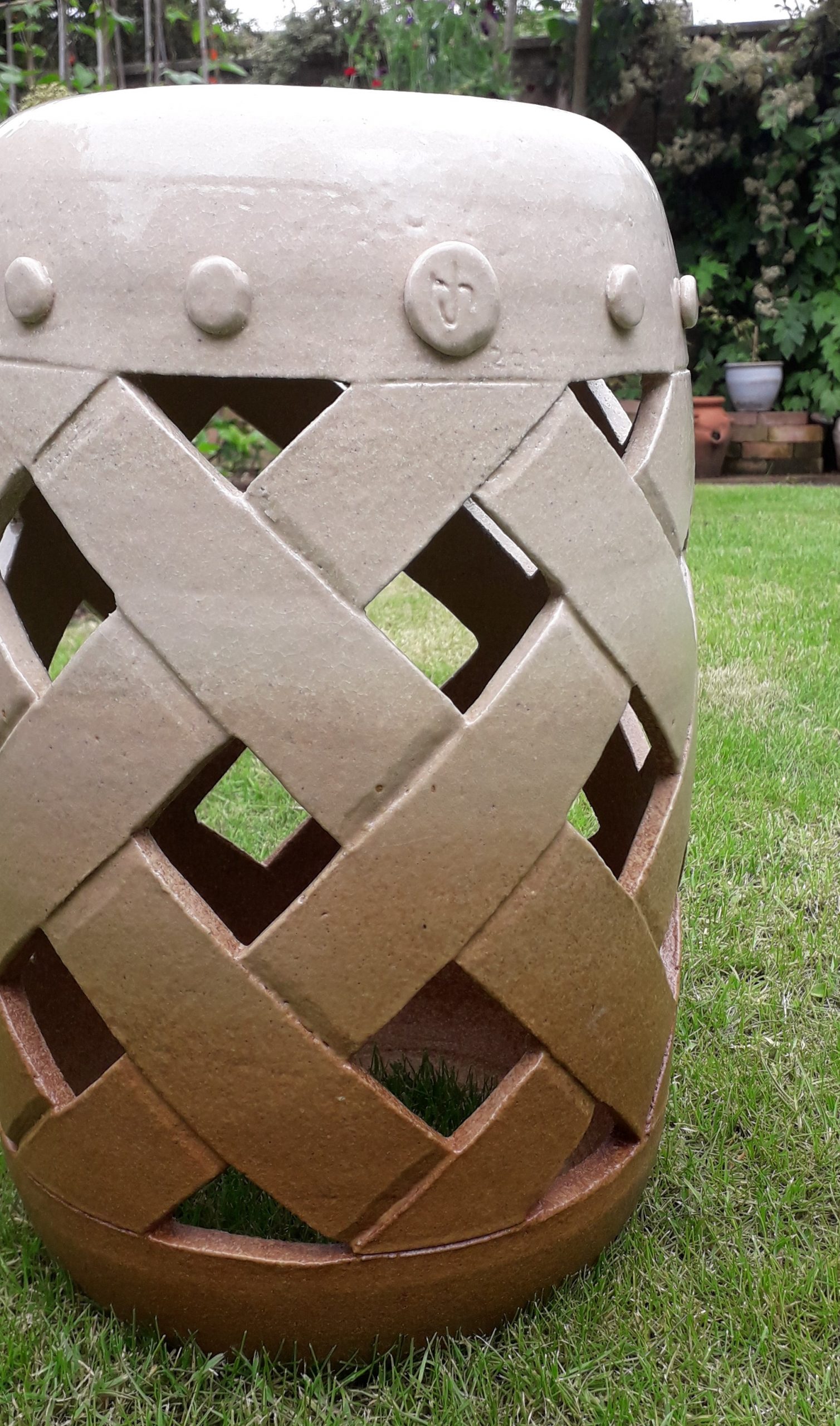 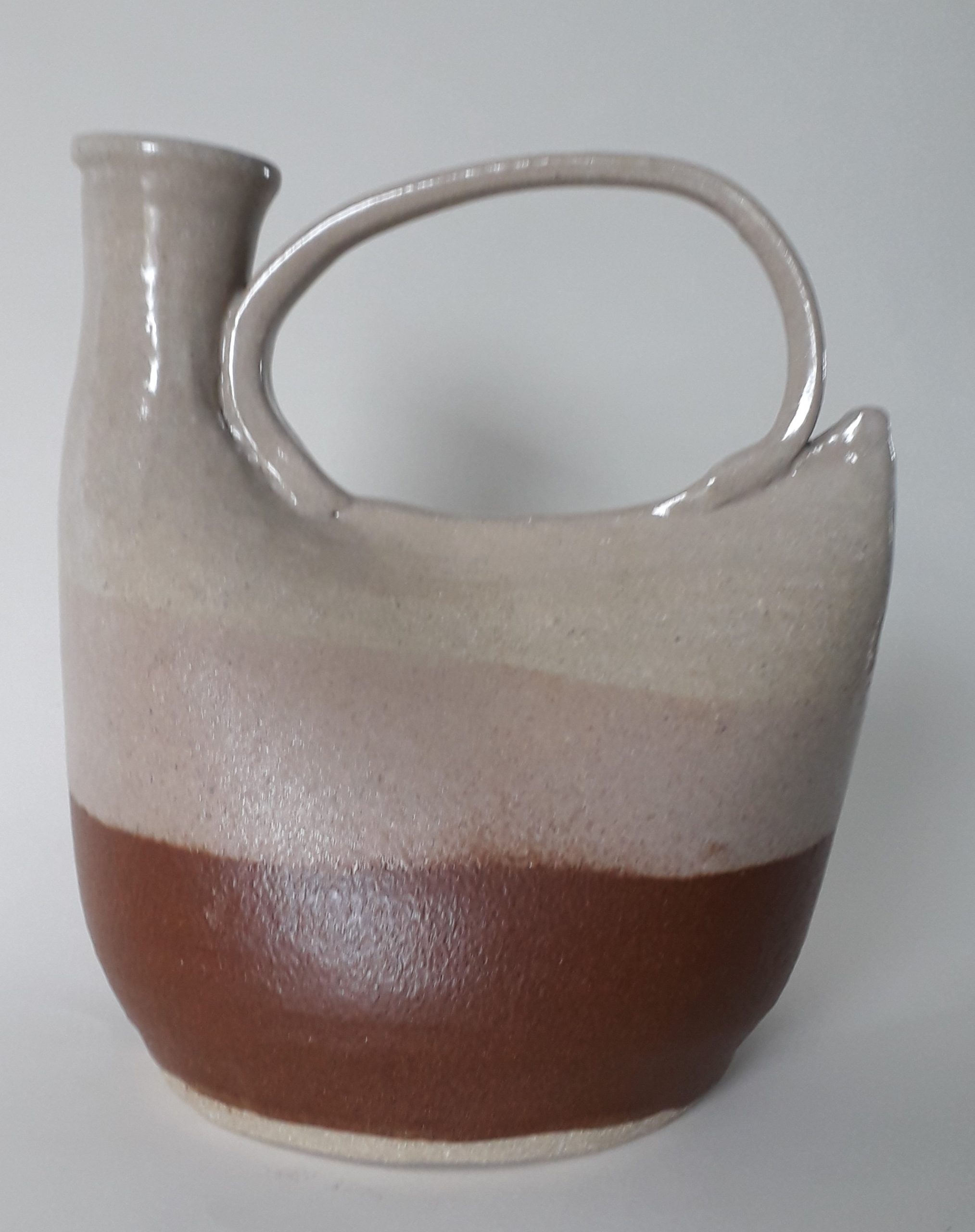 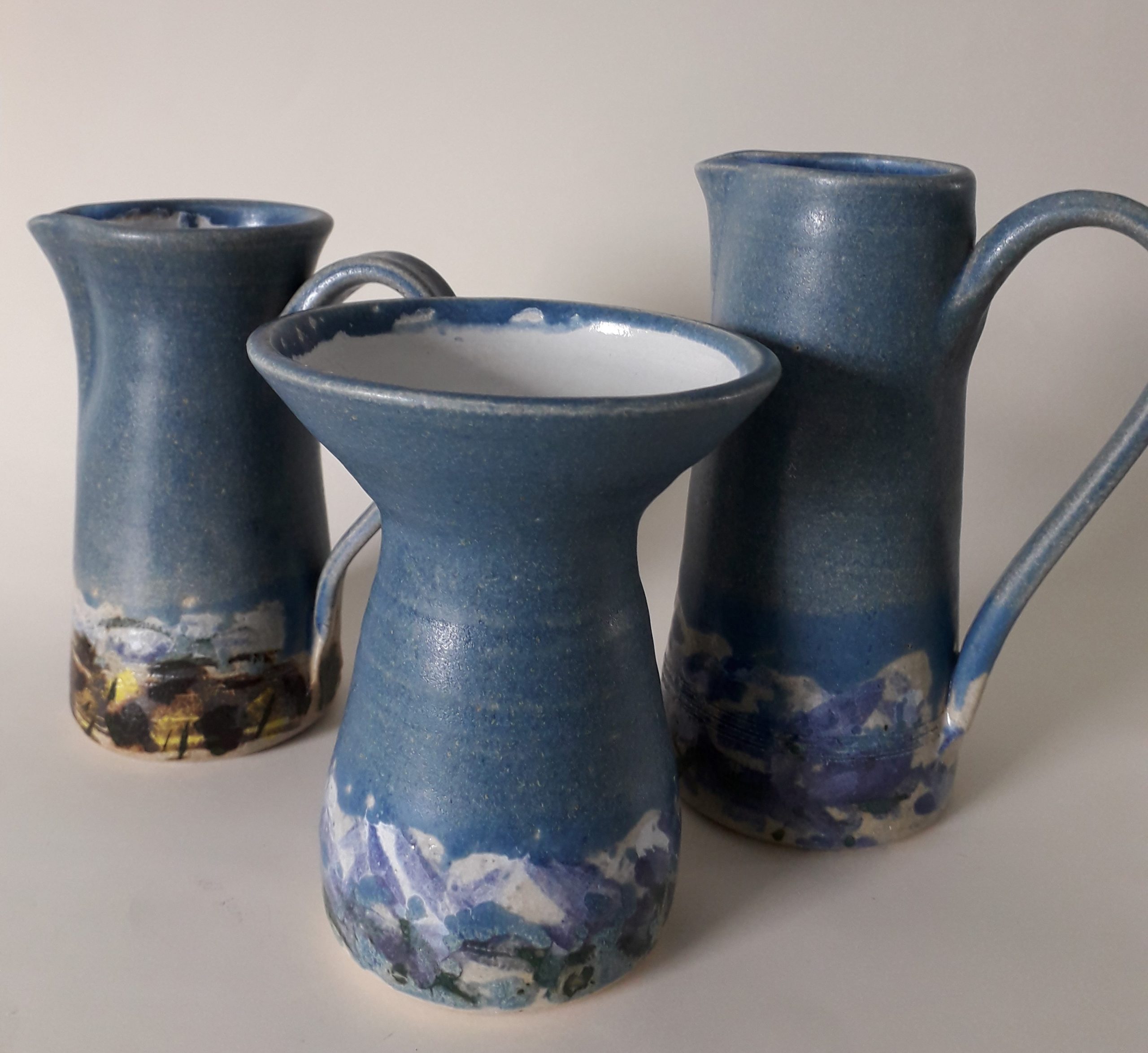 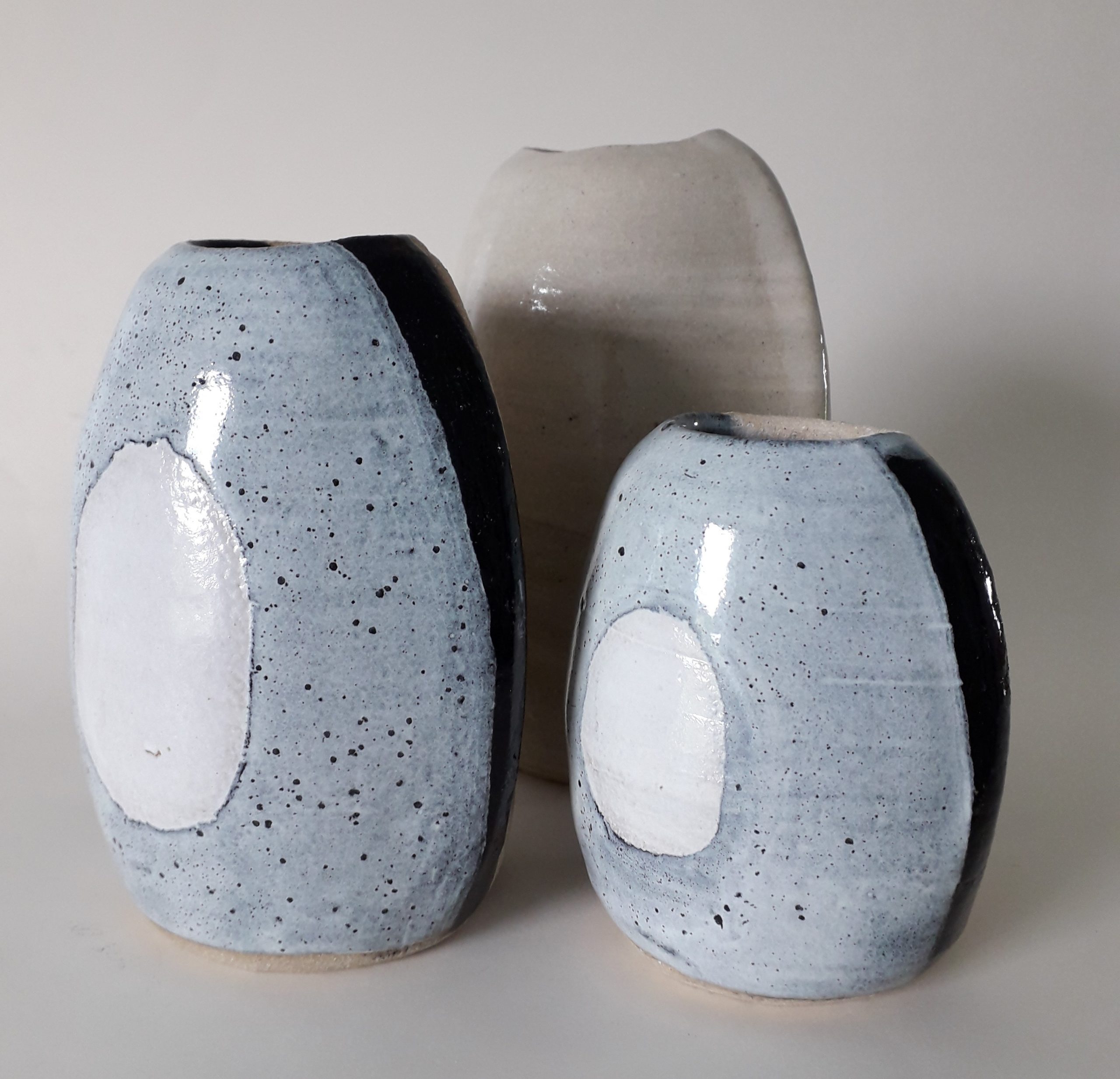 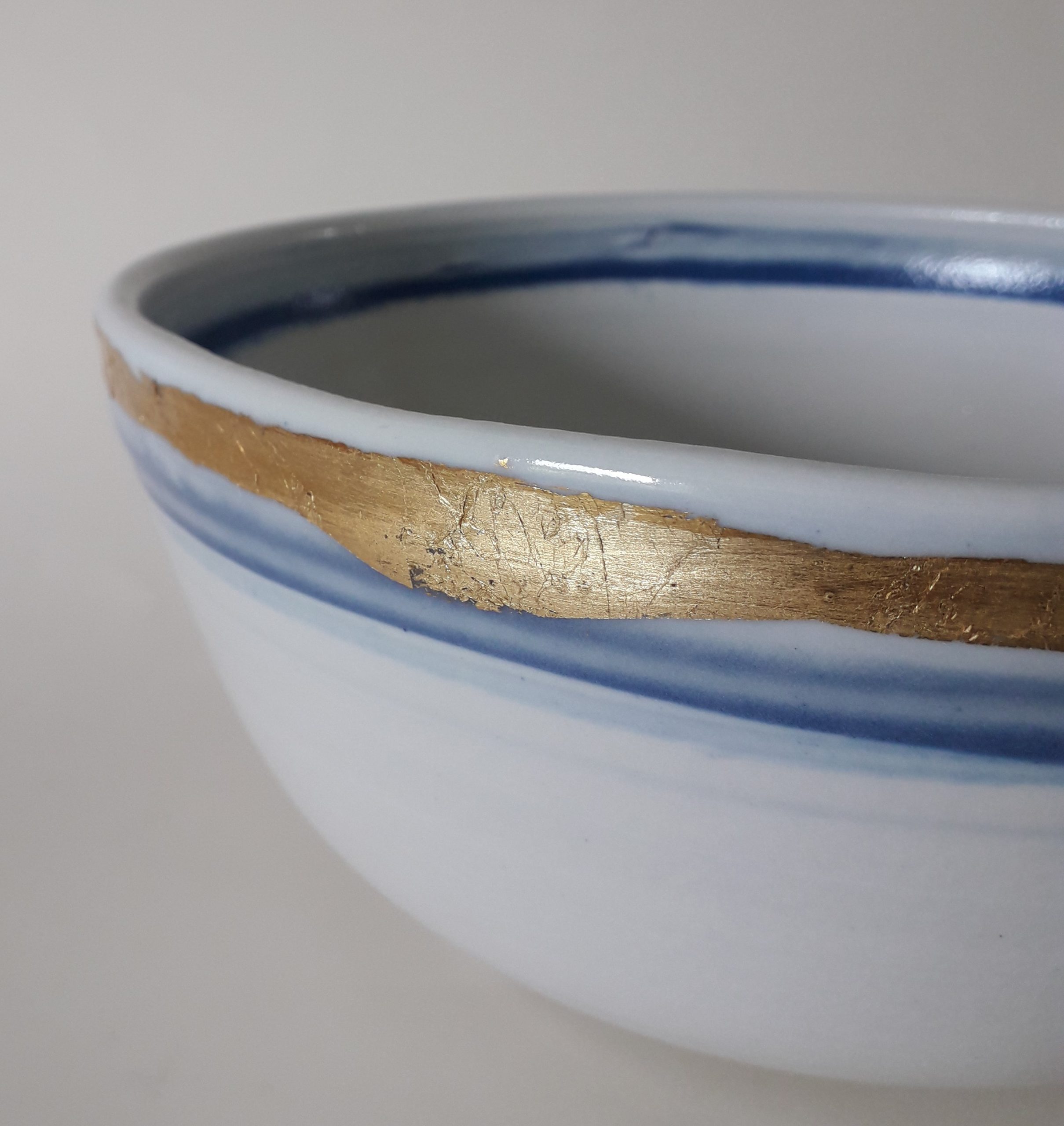 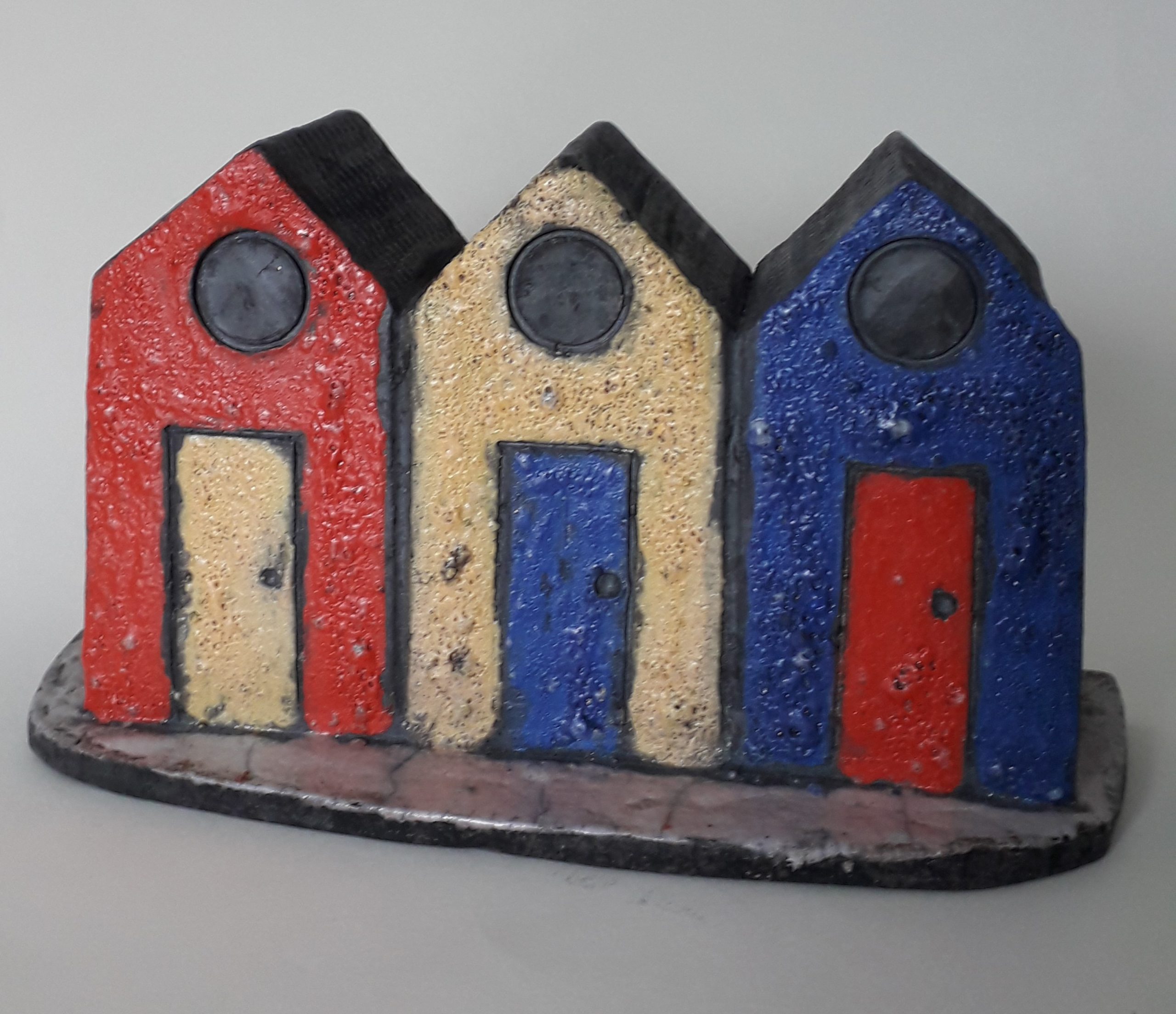 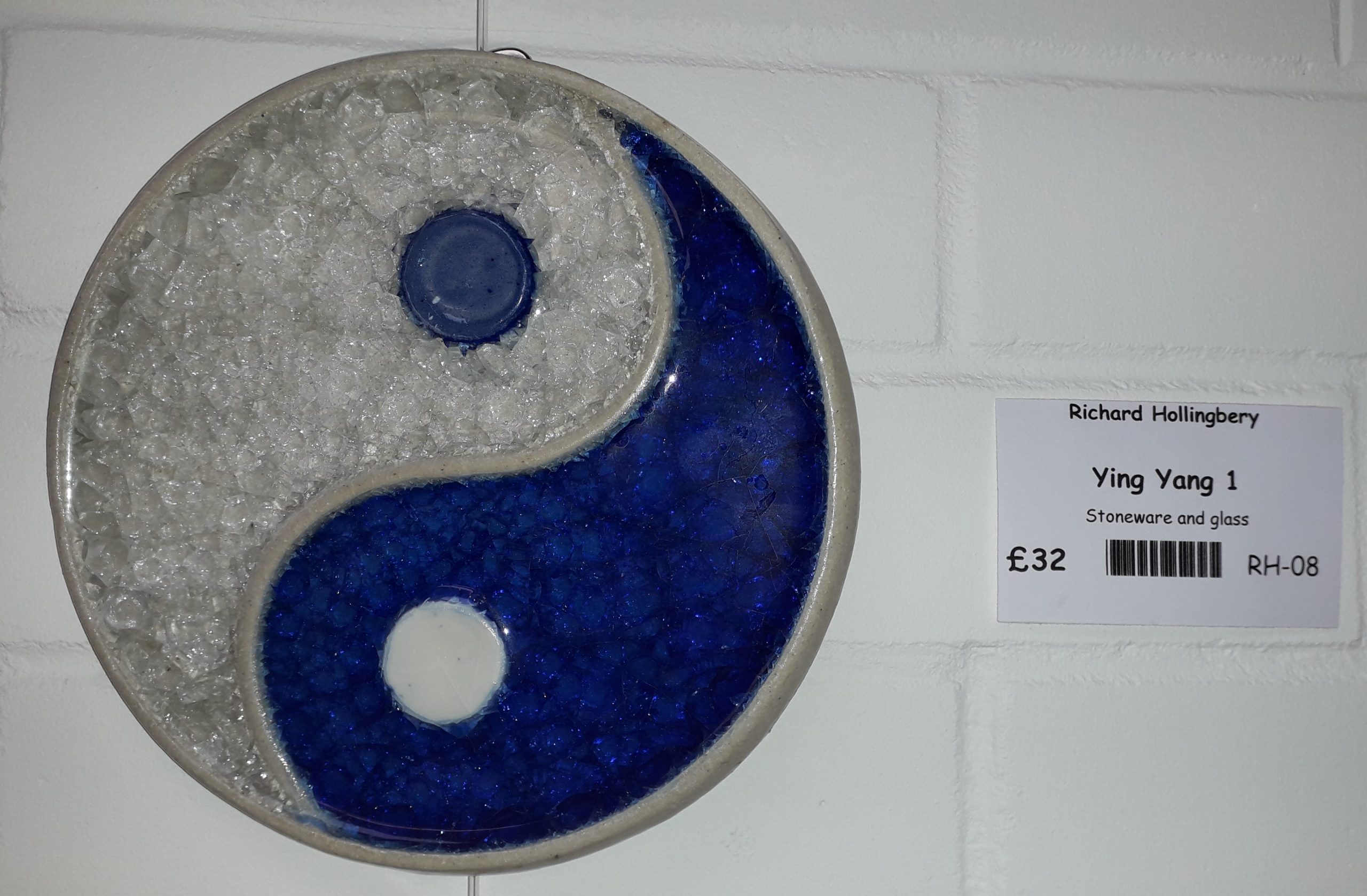 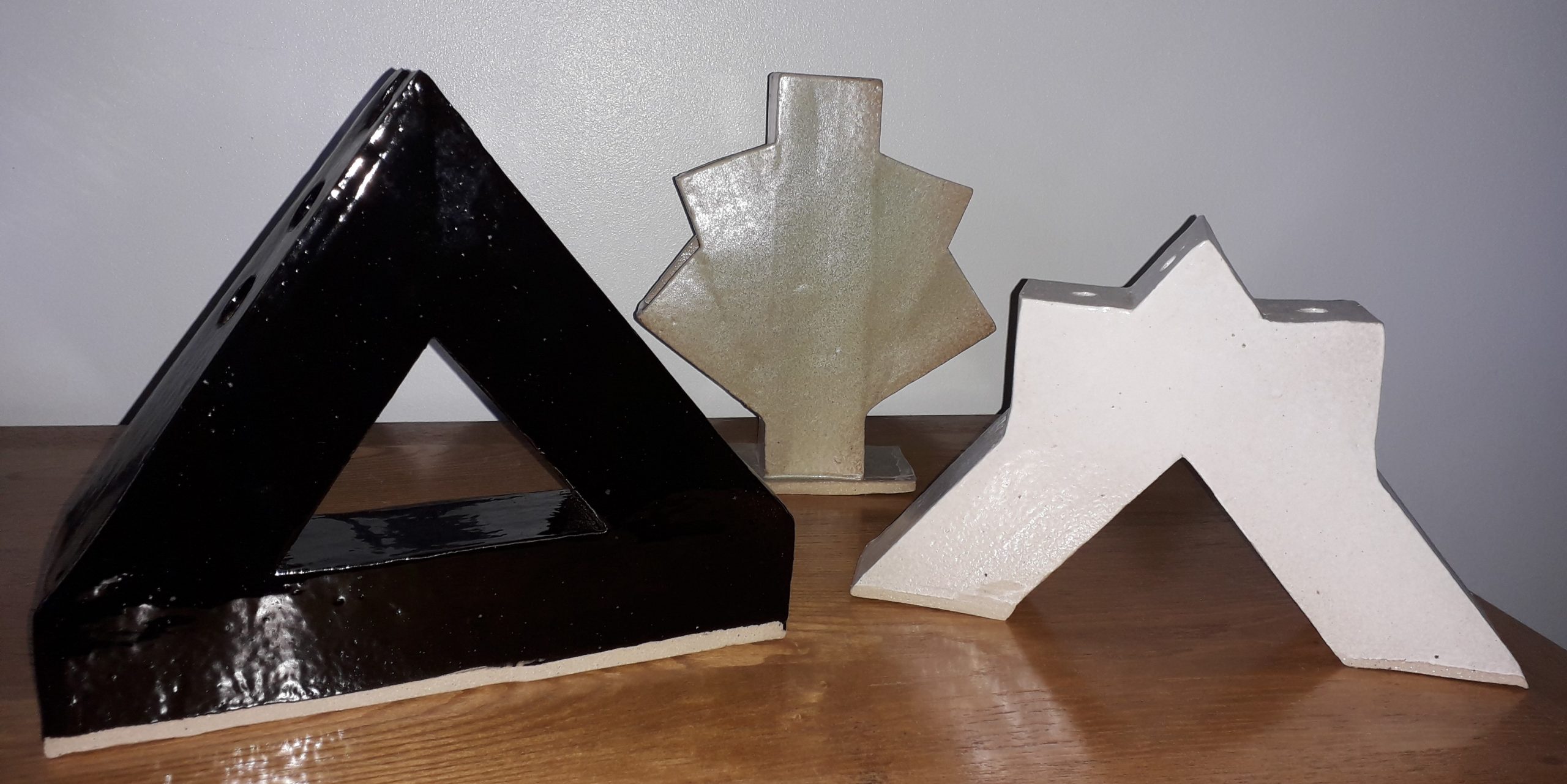 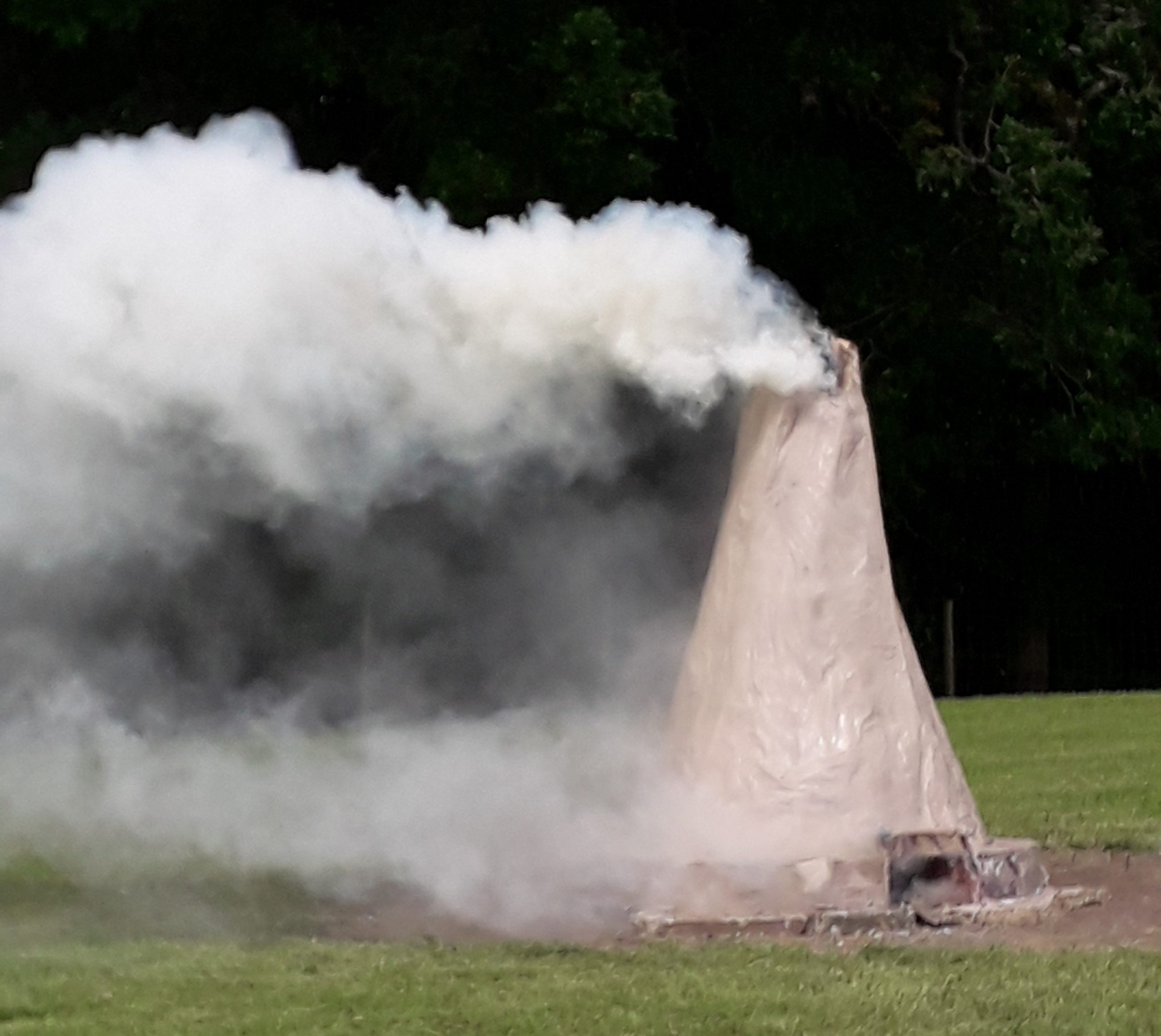 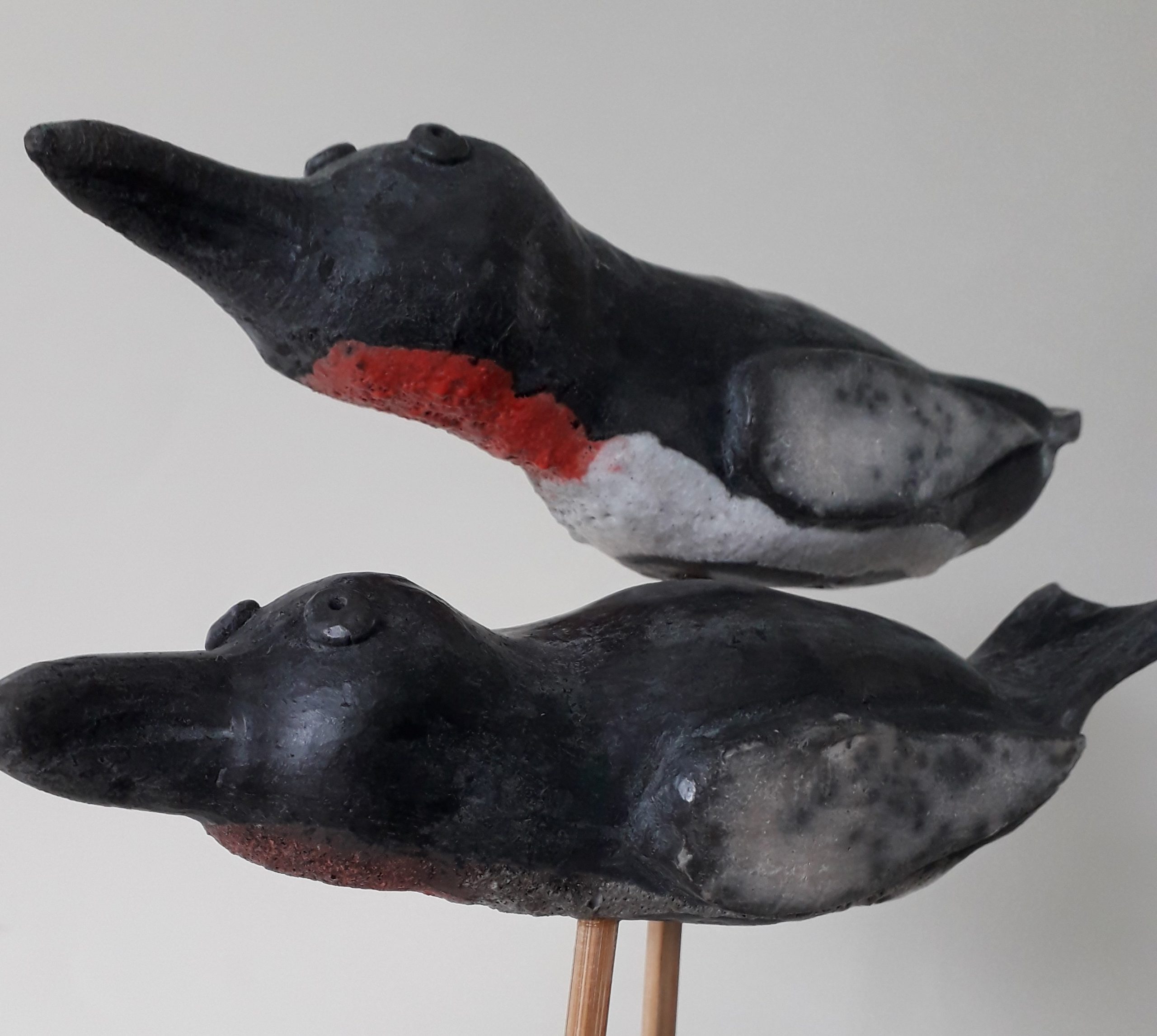 Automatic Slideshow.  Click on Image to bring up Larger View.