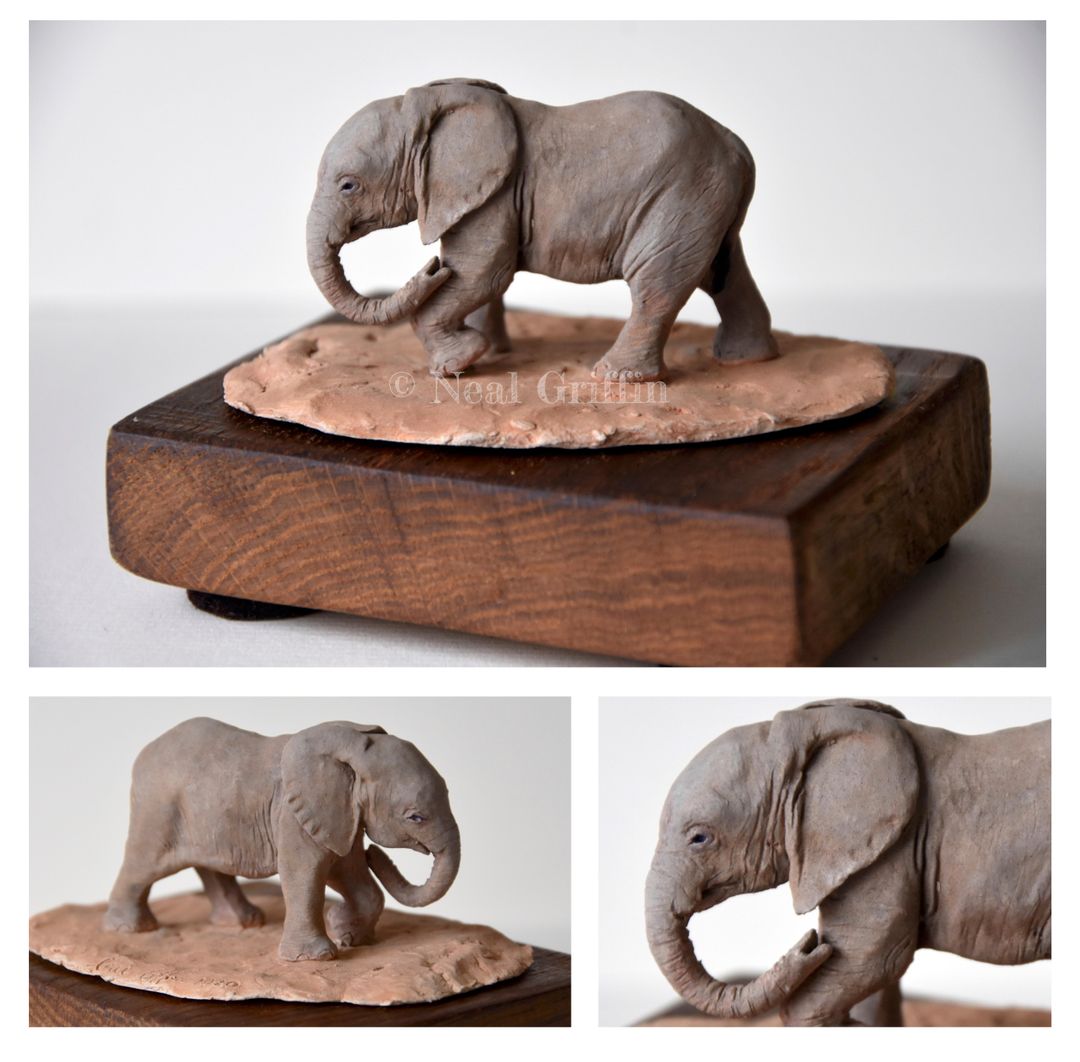 A unique hand made sculpture of an elephant calf using paper clay and painted using underglazes to create a matt look. Mounted on a piece of reclaimed wood. 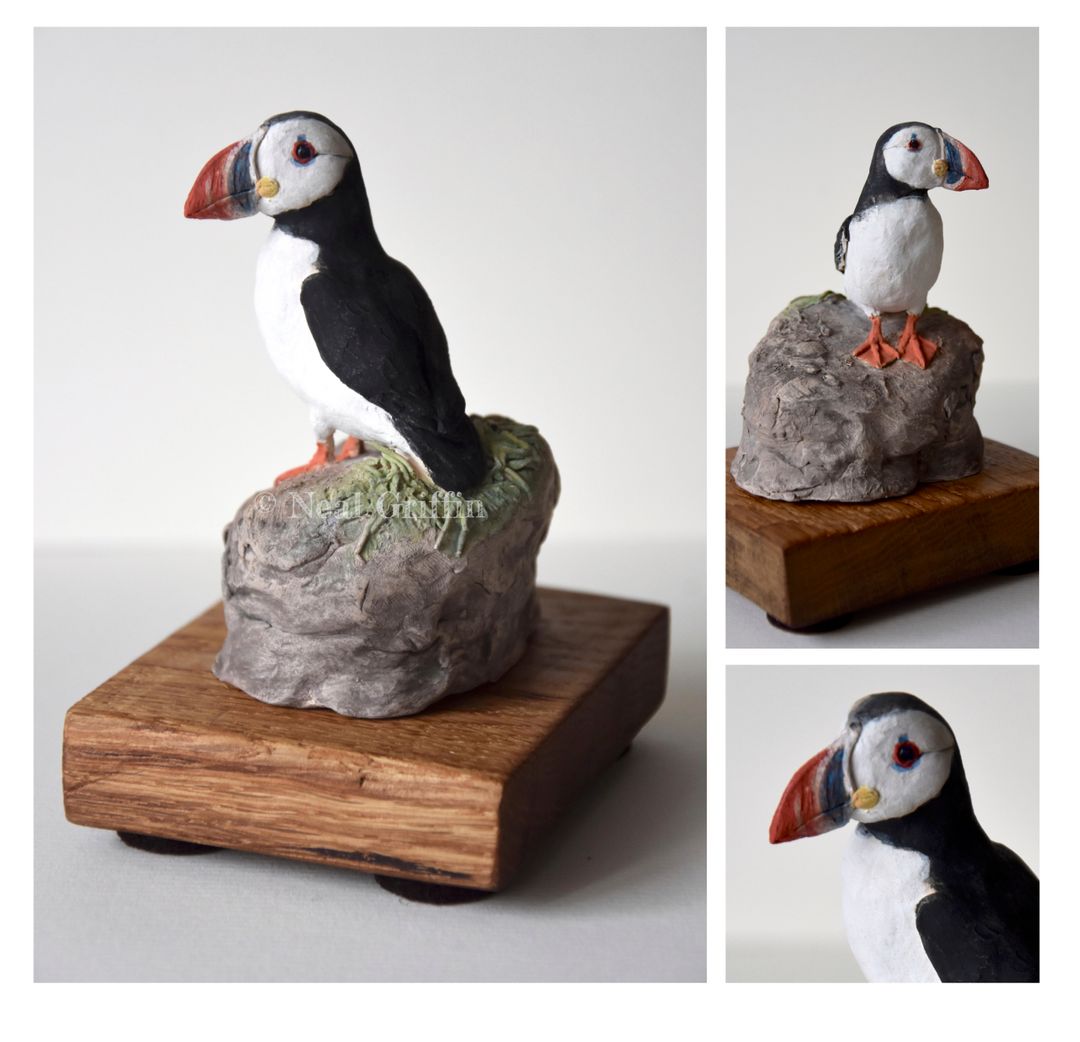 A unique hand made sculpture of a puffin using paper clay and painted using underglazes to create a matt look. Mounted on a piece of reclaimed wood. 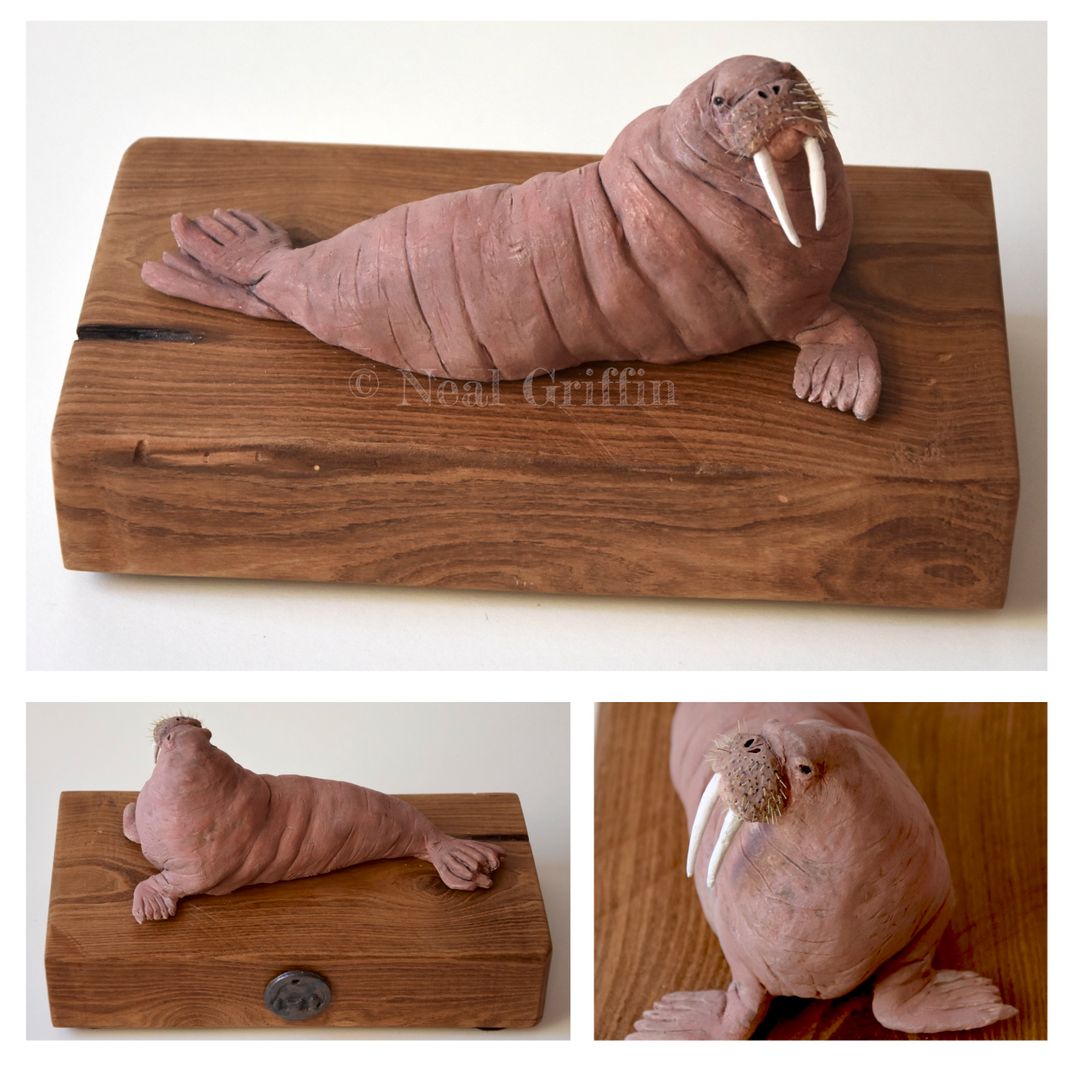 A unique hand made sculpture of a walrus using paper clay and painted using underglazes to create a matt look. With added bristles made from an old paint brush. Mounted on a piece of reclaimed wood. 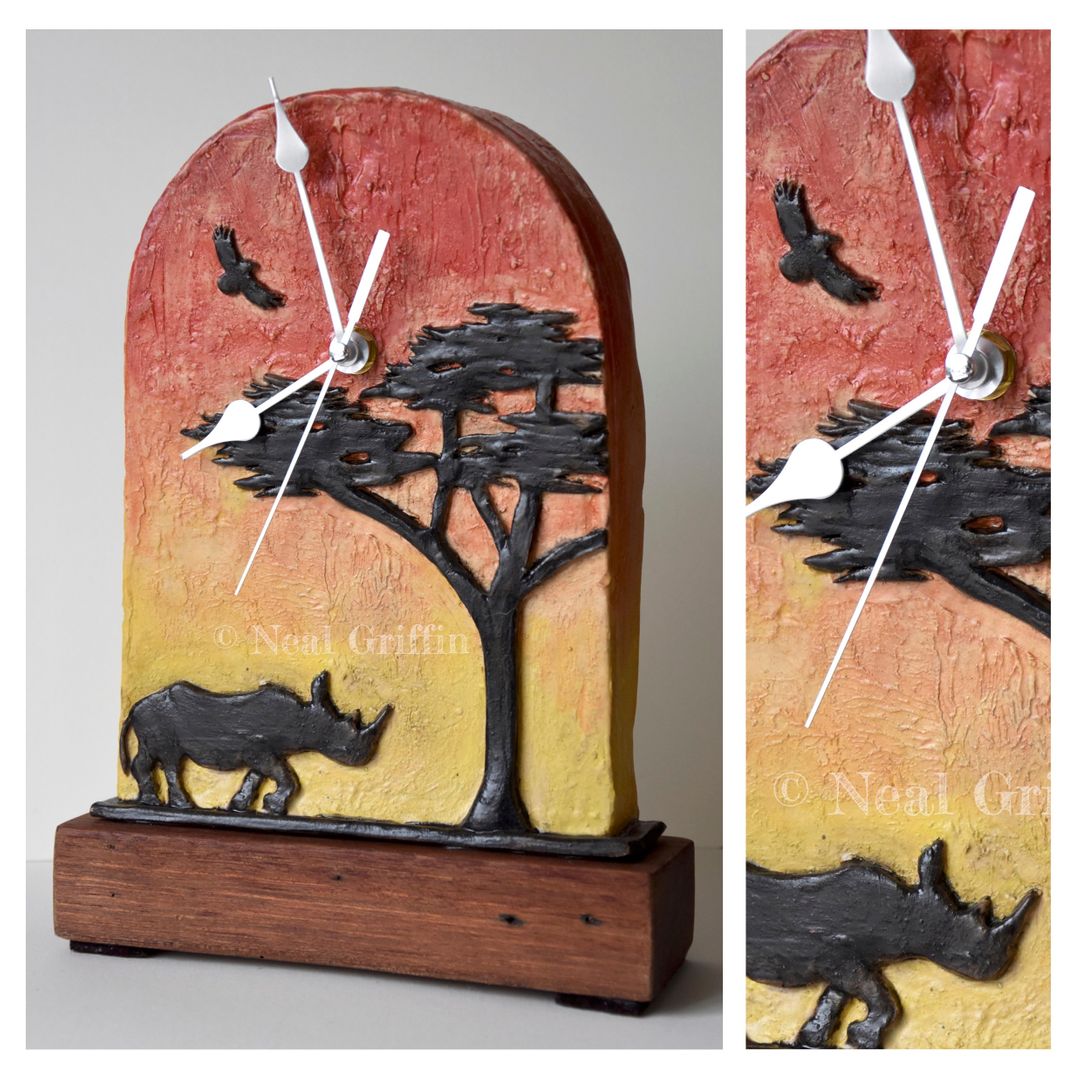 A hand-built earthenware mantel clock with a sweeping clock movement mounted on a piece of reclaimed wood. Decorated in relief with a silhouetted of an acacia tree, rhino and eagle. 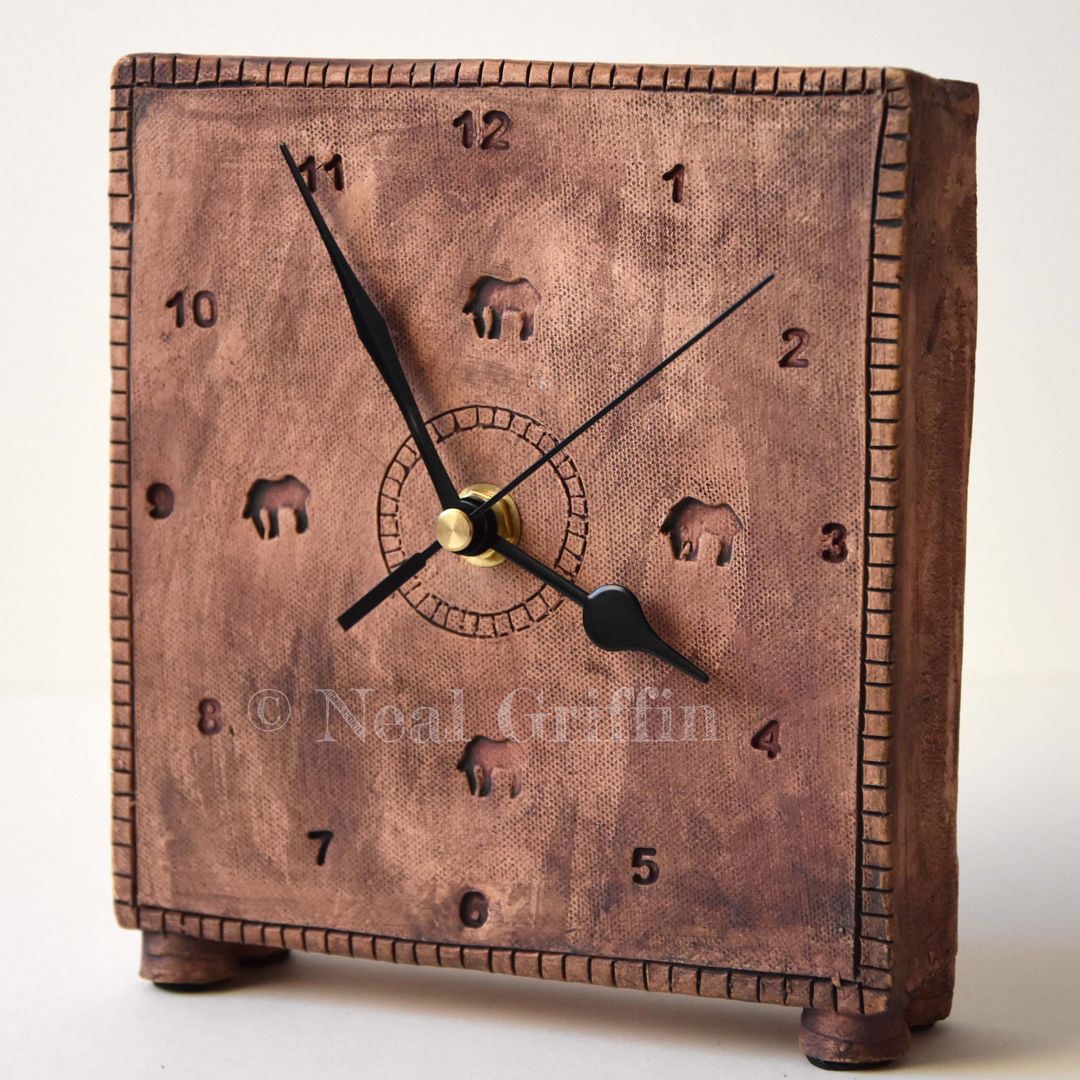 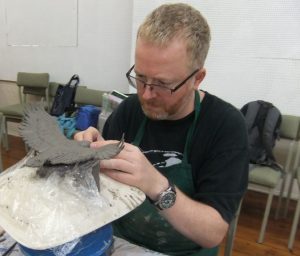 Neal is a multi award winning professional artist from Southampton. From an early age he displayed a passion for drawing and painting and with encouragement from his GCSE art teacher Mr Clegg he began to develop his skills. He continued on to do his A-Levels and then on to a foundation course at Portsmouth College of Art & Design. In 1992 he enrolled at Anglia Ruskin University in Cambridge for a degree in Graphic Arts & Illustration, specialising in printmaking. Graduating in 1995 with a 2:1 BA Hons degree.

Since graduating much of Neal’s inspiration has come from his love of the natural world with much of his work concentrating on studies of animals with a particular interest in wildlife. He tries capture the essence of the animal concentrating on light, form and movement to produce a piece of work with the feeling of depth and life. He works in both 2D and 3D with a variety of mediums including oil, pencil, printing, soapstone, clay and plaster of Paris. Using the medium that is best suited for the piece he wants to create.

Neal was a member of the Marwell International Wildlife Art Society from 2003 – 2015. In 2009 he was awarded the prize for the most improved artist and in 2014 he was runner up for the best 3D sculpture. He has exhibited at The National Exhibition of Wildlife Art where in 2009 he was runner up for the David Cook drawing award. In 2017 Neal won ‘Best Depiction of a Creature in Action’ at the Association of Animal Artists exhibition in Basingstoke. He has also been shortlisted for the DSWF Wildlife Artist of the Year in 2013 & 2015 and a finalist in 2018, 2019 & 2020. He also exhibits at the Southern Nature Art Exhibition and with Romsey Art Group, The Southern Ceramics Group and The Wildlife Art Society International which he is a member of.

Delivery:  Posting and packing for some items or I can deliver or arrange to meet.